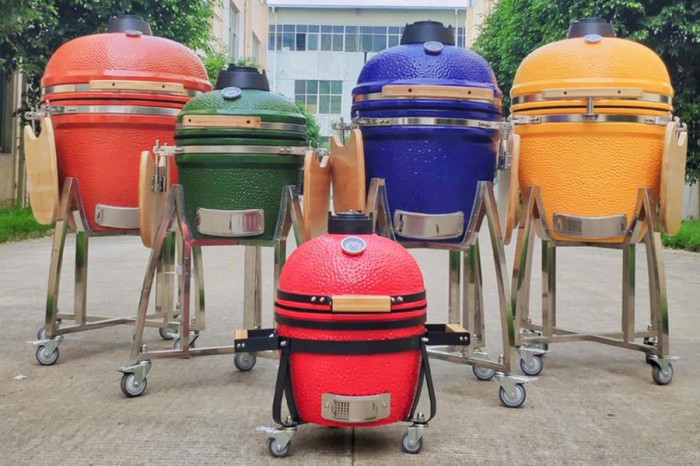 THE MANUFACTURER OF KAMADOS NUMBER 1 IN CHINA.

The economic rise of China, which has been placed in a place of privilege among the world's major powers, and its expanding market condition, have resulted in an extraordinary industrial and commercial flourishing that includes the manufacturing of all kinds of goods and the provision of all kinds of services.

Within this imposing economic development could not miss the appearance of different companies dedicated to manufacturing kamados. Even more if we consider that China is the place of origin, approximately 3,000 years ago, of these peculiar ceramic ovens.

It is in this context that arises Auplex, a thriving company founded in 2003, focused initially on the business of manufacturing heat transfer machines and, since 2010, has a division focused exclusively on the manufacture of kamados , the Auplex Kamado Grill Co. Ltd.

We are, therefore, faced with a tremendously young brand that, however, thanks to its ambition, its constancy and its good work, has been progressively expanding its facilities and the volume of its production, managing to position itself, in less than a decade, as the most powerful company in China in the manufacturing and marketing sector of kamados.

The key to this rapid success could be, as we have pointed out, in the tenacity of those responsible and in their extraordinary ambition, of which they give good account details such as the impressive dimensions of their factory, which with its more than 30,000 square meters speak to us of an enormous productive capacity, or its search for self-sufficiency, which is highlighted in the fact that, unlike other brands, in addition to the different elements that make up its kamados, Auplex manufactures around 85% in its modern plant of its metal accessories.

A final point to highlight in Auplex's business policy is its international vocation, which, once the Chinese market is dominated, translates into a determined attempt to expand its distribution networks to capture new market shares in the kamados sector, one of its weak points given its youth as a brand and its location away from western markets.

However, the biggest weakness of the Auplex brand would probably be related to the negative mental image that, not without justification, many Western consumers have about the quality of products made in China. A bad reputation that could frustrate or, at least, curb its aforementioned objective of expanding to other countries and markets.

Aware of this controversy, those responsible for Auplex have made an important commitment to break this stereotype. This has resulted in the performance of strict audits, both of its manufacturing facilities and the final product, aimed at obtaining different quality certificates that attest to the zeal put into the different manufacturing processes, the material resistance of its ceramic components and, In short, the excellence of its kamados.

With regard to its product catalog, it is distinguished from those of other manufacturers for its wide range, both in terms of the kamados themselves and an extensive list of accessories that includes grills, irons or stones for pizza, even wooden and metal furniture to house the kamado, passing through covers, electric charcoal lighters, baffles, supports for roasting birds ... and all kinds of spare parts.

In the specific case of the kamados, unlike what happens with other brands, its amplitude will not revolve only around the variety of sizes offered, ranging from 13 to 23.5 inches - between 33 and 60 cm., approximately- with a good number of intermediate models âof 14, 16, 18, 20, 21 and 22 inches-, but also to their aesthetics and, more specifically, to their color, then, depending on the Model chosen, we can find enamel finishes of up to 12 different colors.

An unknown to reveal

Be that as it may, to honor the truth, and despite its great potential as a brand, until the commercialization of the Auplex kamados is no longer widespread and consolidated in Western countries, its benefits or defects will not cease to be an unknown , sooner rather than later, it will be revealed and will place us before its true reach as a brand.