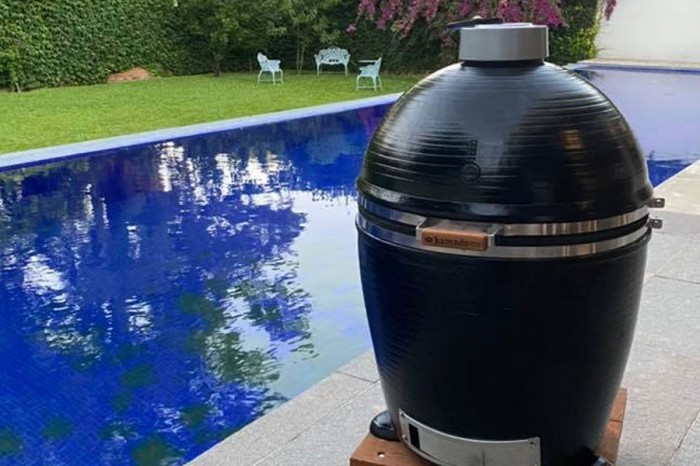 B10 KAMADOS PRODUCED IN ARGENTINA.

The history of the Argentine kamados Kamado-B10 begins in 1994, at which time the industrial designer MartÃ­n BÃ©raud, a roast lover who discovers the excellence of these peculiar kitchen tools and realizes his enormous culinary and commercial potential , contact the Japanese manufacturer Imperial Kamado to close an agreement that would allow them to be imported and sold in the Argentine market.

Once the exclusivity was obtained with the aforementioned Japanese firm and received the first batch of kamados, it decided to present its benefits to the public at an exhibition, the Japan Expo, held that same year at the facilities of the Rural Society. But things are not going to go as expected. The ignorance of the qualities of the kamados and the consequent lack of interest among the participants frustrated their expectations and pointed to a resounding failure, so that, in the absence of two days for the closing of the event, he strips off his elegant businessman attire , an apron is sheathed, light a kamado and cook some small balls This last-minute strategy allows you to bring the product closer to potential customers and is specified in the closing of several sales.

Encouraged by the success of this experience, the following week he enrolls in the Gourmandise 94 'Expo, designs his stand, presents himself as a cook and, with a recipe book in hand, begins cooking live with four kamados the products that he bring those responsible for other positions focused on food. More or less spontaneously, a live cooking show was born in a closed enclosure that caused a sensation among the attendees due to the low smoke emission of the kamados, the absence of odors and the magnificent results in terms of flavor and juiciness of the prepared dishes. Sales skyrocketed and in a high percentage of cases the kamados ended up installed on balconies.

This initial success was going to be, however, quite ephemeral, since the unfavorable situation of the yen with respect to the dollar and the small size of the Japanese market forces its distributor to initially move its production to China and, after a significant decline in the quality of its products, to definitively close its doors after filing bankruptcy.

This unfavorable situation will encourage MartÃ­n BÃ©raud to move from importation to manufacturing his own kamados. For this, it brings together a multidisciplinary group of specialists and artisans who, after making a thorough study of the properties of ceramics, will find the perfect formula for its application in the production of kamados. Kamado B10 was born.

Crafts in their purest form

The differential features of Kamado B10 compared to other brands of kamados should be sought in materials and manufacturing techniques. First of all because, unlike what happens with other companies' products, their kamados are made entirely by hand with traditional techniques. This includes its individualized manufacturing on a lathe, which reveals the care put into the elaboration of each piece and distinguishes them from other kamados that are produced in chain with methods that we could qualify as âindustrialâ.

In addition to this, compared to the use of complex ceramic compounds, the B10 kamados are made from carefully selected mud and clays that, according to their managers, would favor roasting at low temperatures for long periods of time and, consequently, would provide unique properties to the food cooked in them.

Natural raw materials and artisanal manufacturing would therefore be the distinctive elements of the kamados marketed under the Kamado B10 brand, a relatively young company, but which has managed to position itself in the market based on tenacity, large doses of effort and a Commendable concern for the final quality of your products.

Different faces for the same coin

Among the main disadvantages of the KB10 kamados, in addition to the impact that the aforementioned qualities have on their price, and closely related to them, it should be noted their reduced product offer, which is limited to two unique models differentiated by their size: Kamado B10, with an inside diameter of 51 cm. and 100 kg of weight, and the Nano Kamado B10, which weighs approximately 36 kg. and has an inner diameter of 32 cm.

The same could be said of its catalog of accessories, which, apart from a limited number of furniture and kitchen tables and the corresponding protective covers, is practically reduced to a small repertoire of spare parts. Like their kamados, these are only accessible on request, which reveals a demand-adjusted production, which, although not an insurmountable obstacle, subtracts immediate purchase and implies a certain discomfort in a world in which we are accustomed to accessing the acquisition of any item through a simple mouse click.

Faced with these inconveniences, one could mention a final virtue of the Kamados B10 and one of its main peculiarities, which is none other than the possibility of personalizing our kamado with a unique and exclusive design made by artists hired for this purpose. An option that is available in the KB10 Art product line and does not exclude the possibility of choosing between a series of more sober and standardized designs.