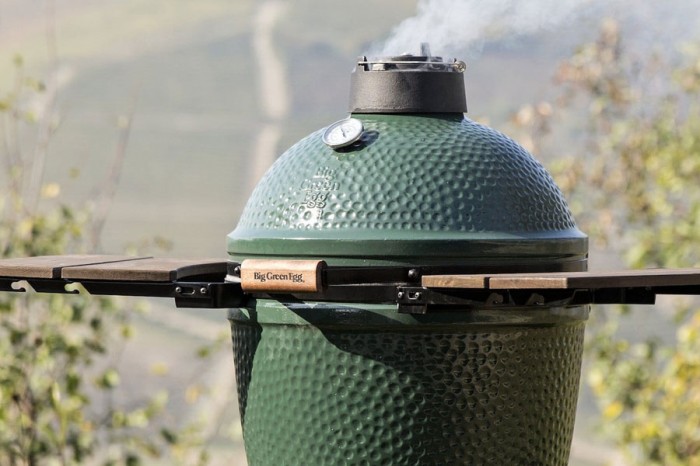 A VETERAN BRAND CONVERTED IN ICON.

Founded in 1974 in the city of Atlanta, the capital of the southern state of Georgia, the Bigg Green company is one of the great pioneers in the kamados manufacturers sector and one of the best known brands among the general public. A good part of this success is determined by the fact that it has been able to create a fully recognizable brand image thanks to the association of the company's name with the characteristic appearance of its ceramic ovens, defined by the peculiar ovoid shape of modern kamados and by its coating with a unique green finish that makes them recognizable at the first glance.

The evolution of the Big Green Egg brand, from its origins almost half a century ago until today, has been marked, among other things, by the search for autonomy. Thus, after some beginnings focused on the importation of kamados from China and Japan, the constant growth of the company has allowed to move from the aforementioned situation, which implied a significant lack of control over the final product, to a status in which independence Regarding external agents it is practically absolute. And this is because, for over 25 years, the Big Green Egg kamados have become self-made thanks to the alliance with a factory based in Mexico that produces them exclusively for the brand, with highly specialized operators and under the specifications determined by the responsible and designers of Big Green Egg.

This freedom for the action has allowed Big Green Egg to experiment with innovative materials, in the case of certain ceramic compounds made with revolutionary technology from NASA, and, above all, completely subject to its criteria the production line, which currently consists of a large number of models differentiated, basically, by their size.

Thus, by briefly reviewing the current Big Green Egg product catalog, we would find, first, the Big Green Egg Mini, a kamado that, due to its small size and light weight, is especially suitable for transfer to a campsite, to the beach, to a picnic or even to a pleasure boat.

It would follow in this list the kamado Big Green Egg Minimax, a compact and height model similar to the previous one that allows its use on a table, but with a higher weight that hinders its mobility and, on the positive side, with a diameter of upper grill that increases its capacity.

The third in increasing order would be the Big Green Egg Medium model, so to speak, the standard size of this brand, equipped with the same technology as higher entity models and with more than correct performance. Immediately afterwards, the Big Green Egg Large would come, the most popular size in the Big Green Egg product range because it has a cooking surface large enough to give family and friends a delicious roast.

A size that is widely exceeded by the Big Green Egg XLarge, whose grill almost doubles in capacity to the previous one, so its use makes it an ideal kitchen instrument for large meetings.

And, closing this succinct enumeration, it would only be necessary to talk about the Big Green Egg 2XLarge, an imposing mass that stands out for its extraordinary capacity, which would make it advisable for professional uses and for events with large numbers of people.

COVERING ALL THE FACETS

This wide spectrum of sizes and models has its correspondence in its huge catalog of accessories, a colossal set of utensils that includes everything one can imagine in the field of grilled cuisine.

Grills, irons and trays, trolleys with wheels and supports, shelves, side tables and modular furniture, baffles and ceramic containers for baking, casseroles, pans, woks, Dutch ovens and paelleras, protective covers and spare parts, tools for cleaning and maintenance , coal, lighters, briquettes ... The catalog of utensils sold by Big Green Egg is practically infinite, which greatly expands the possibilities and becomes one of the strengths of this manufacturer, but at the same time in one of its major drawbacks the fact that, unlike what happens with other brands of ceramic ovens, none of them is included in the basic equipment of the kamado, which, in the end, represents a notable increase in the final price of it if we want to make ourselves With a series of elementary tools to start enjoying our kamado after your purchase.