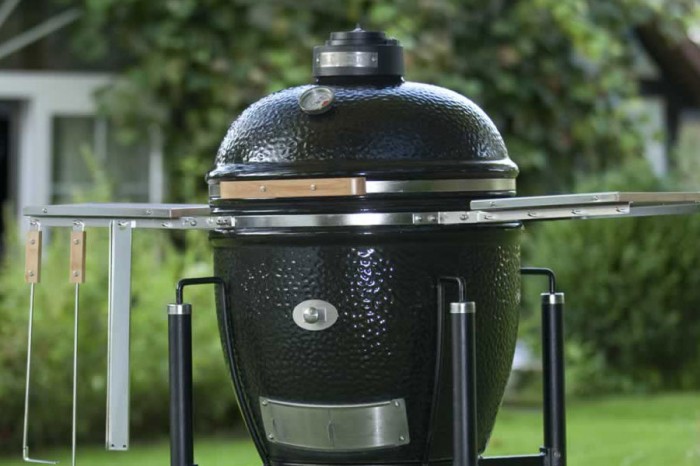 A EUROPEAN BRAND IN A SECTOR DOMINATED BY THE US

The introduction of the kamados in the western world by the American troops destined in the Pacific at the conclusion of the Second World War, a milestone that would mark the evolution of modern kamado, and the enormous fondness of the inhabitants of that country for cooking grilled and outdoor food, with the consequent sales volume that comes with a population as populous as the United States, are two factors that explain the absolute dominance, worldwide, of US companies in the manufacturing sector and commercialization of these peculiar ceramic ovens.

One of the few exceptions to this rule would be the one starring the Monolith brand, a German company that, thanks to the quality of its products, its search for innovative solutions and, ultimately, the benefits of its kamados, has managed to become an important place in the competitive world of outdoor kitchen instruments.

The seriousness, the constancy, the precision and its high capacity to incorporate innovative technologies are some of the qualities that are normally attributed to German companies, which are part of their essence in the collective imagination and that could also define a brand that, Like Monolith, he tries to honor his place of origin in his products.

It may be difficult to imagine how these virtues materialize in a relatively simple technology such as that of the Kamados, but the truth is that Monolith has managed to turn these traditional kitchen tools around to make their use easier, make some of them more comfortable the most common tasks and, in short, try to provide them with the expected benefits of a product of the 21st century.

Two good examples of this statement could be its exclusive wood chip feeding system, which allows its introduction during smoking through a hopper without lifting the dome and, therefore, without causing unwanted temperature or humidity changes and, moreover, its revolutionary integrated digital system for temperature control, which responds to one of the issues that most concern users of less experienced kamados: to reach and maintain the desired temperature in our kamado. One option, the latter, which is only incorporated in its higher-end models, the Guru Edition, but which includes curiosities such as text message alerts, temperature graphs and sharing on social networks, among others.

As usual among the different brands dedicated to the marketing of kamados, the product catalog of the Monolith brand is composed of a series of models that are distinguished, in broad strokes, by their size and, consequently, by their surface area. cooking and its greater or lesser capacity.

Making a brief breakdown of this catalog, we would first have the Monolith Junior model, the brand youngest with its 33 cm grill. in diameter and its 40 kg. of weight. It would be followed in dimensions by the Kamado Monolith Basic, which has a 46 cm grill. in diameter, weighs about 85 kg. and that is none other than a simplified version of the Classic model, of the same dimensions but with a weight of 90 kg. and with some equipment difference such as the inclusion of the hopper for the introduction of wood chips. Finally, occupying the highest place by size, performance and price, we would have the Monolith Le Chef model, a great 160 kg kamado. of weight that presents a grill of 56 cm. capacity.

All of them are available in different versions and with different equipment options that should be taken into account so as not to encounter unwanted incompatibilities once the purchase of a model of this brand has been made and that, logically, will increase or reduce the final cost of the Kamado according to the demands and priorities of each user.