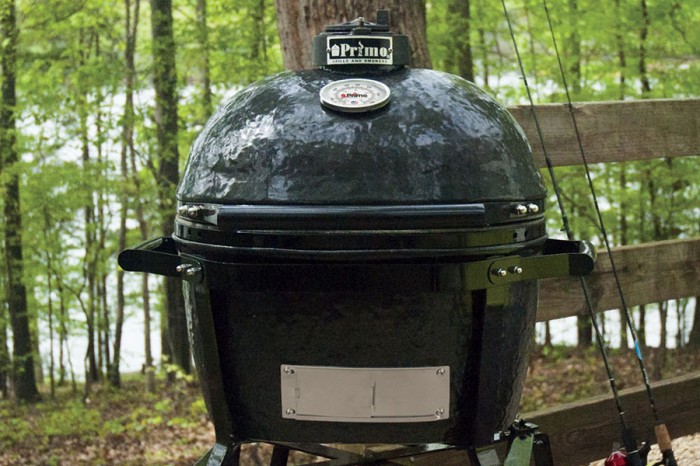 A casual encounter, a beautiful love story, a banquet to celebrate Thanksgiving, important technical and commercial obstacles and, above all else, the entrepreneurial commitment of a true hipster. The series of events that led to the birth of the Kamados brand Primo could be part of a novel or a screenplay, but the truth is that these novel ingredients took place in the life of real life.

The story begins at the end of the 80s, when the Greek George Samaras, who had channeled his professional life as captain of a yacht destined for tourist excursions on the Greek islands, meets and falls in love with an American who had rented his boat for Spend the holidays with your family. Burning the flame of love, the couple maintains contact in the distance and, after the transfer of women to Greece, they end up getting married and settling in the Hellenic country until, seven years later, they decide to move to the US.

It is in that country where George Samaras knows the benefits of the Kamados when his father-in-law, who had one of these unique ceramic ovens, prepares a succulent turkey to commemorate Thanksgiving. Surprised by its spectacular results in juiciness and flavor, Samaras buys a kamado, uses it regularly, transmits its magnificent culinary results to family and friends and, given their growing interest, begins to send them to their home country. The wick was on.

From then on, the avalanche of requests from Greece encourages him to contact the manufacturer to request that he be granted the distribution of said kamados in his country of origin, but the response was negative, making him aware of the potential economic of the idea, he decides to make them himself.

After a series of obstacles in obtaining a ceramic compound suitable for the manufacture of kamados, in 1996 Samaras began its business journey installed in a tiny rented warehouse of 77 m2 that only allowed it to manufacture two kamados at the same time. The name chosen for your company would be "Cousin", for its resonance and its translation as "the first" or "the best" in Italian.

From those complicated origins up to today, the Kamados brand Primo has experienced a remarkable growth which is realized, among other things, its headquarters, a splendid installation of 10,200 m2 in the town of Tucker, Georgia (USA), or its important commercial distribution network, which covers 27 countries worldwide.

The key to promotion as a Primo company could be in its capacity for experimentation and innovation, which has led its designers to create original proposals to try to distinguish themselves from their competitors.

In this sense, among its most outstanding contributions, two major milestones could be noted: the launch, in 2000, of the Primo 2000 model, an attempt to combine the benefits of ceramic kamados with conventional gas barbecues and, just a couple Years later, in 2002, the introduction of a patented oval profile grill that, at least in the words of the company's marketing managers, would offer greater versatility and higher cooking efficiency.

At present, the Primo brand product catalog is broadly divided into two large production lines that differ, basically, by their feeding system.

The first of these would be the so-called Primo Grill, a range of traditional coal-fed kamados, which are available in different sizes, from the largest to some that we could consider as portable, that have the characteristic oval shape of this brand and that they can be purchased in isolation or mounted on cars or stands that, in almost all cases, are sold separately.

A second line would follow the path marked by the Primo 2000 model and would be headed by the Primo Oval G 420 barbecue, a peculiar attempt to provide conventional gas barbecues with the benefits of the kamados by introducing a dome made of ceramic material to improve Your benefits This technical solution would provide the advantages in terms of cleaning and quick ignition of the gas barbecues and, at the same time, would increase the retention of heat inside this ‚Äúpseudokamado‚Äù, which, at least theoretically, would preserve in greater degree of moisture and natural food juices, which would result in more tender and juicy roasts.

To these ranges of kamados it would be necessary to add a small selection of accessories that are sold separately and include baffles, pizza stones, coal and fire starters, rib grilles, digital thermometers, grills and irons, tools for cleaning ashes and grills, chicken stands and, of course, covers for the protection of kamados.